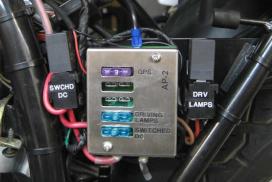 The R100RT doesn't use the modern CANBUS electrical architecture of the latest BMW motorcycles, and in my book that's a good thing. As a result there's no need to play games trying to trick computers into providing electrical power for accessories, but the flexibility and safety provided by a well designed and built auxiliary electrical bus pays big dividends even on a twenty year old bike. I plan on powering an electric jacket, electrified tankbag, GPS, and auxiliary lights, and didn't want a hodgepodge of wires running around under the tank. I used a Centech AP2 fuse panel when I added driving lights on the R100GS, so decided to go that route with the RT as well. The AP2 is an upgrade to the AP1 on the GS, and it has two banks of fuses and power taps, each with a separate power source. That would let me wire one so that it was always on, and switch the other bank with the ignition. That's a nice option for a GPS, which doesn't draw a lot of current and is sometimes used when the engine is off. Yet there's no chance of leaving on heavy drawing items like a jacket or lights if you forget to turn them off, as turning off the ignition will kill them all. The biggest problem was finding a place to mount the AP2. Even though it's not very big, the spot under the seat I used on the GS was taken up by the BMW fuse box on the RT. After sleeping on it a couple of nights, I came up with the idea of fabricating an aluminum plate that would fit under the left side cover, and mounting the components on it. That location is close to the battery, and as it turns out, close to trigger signal sources that will be used with ignition and high beam sensing relays. I toyed with the idea of mounting the plate with hose clamps, but didn't like the damage that would result to the frame tube paint. Instead I used a combination of heavy duty zip ties and industrial double faced tape.
You must be a member to view complete articles on this website. If you are already a member, you can log in here. If you aren't a member yet, you can purchase a membership here.