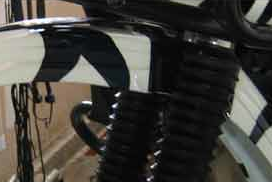 Let's get something out of the way right up front: If conditions are so bad that you're worried about mud packing between the front fender and the wheel, you've got no business on that road with an R100GS. A high fender on an R100GS is just poseur hardware. But when your factory low fender gets mangled beyond recognition, you're left with a choice between high and low. More out of curiosity than anything else, I chose high. Now I had to decide on which fender. If you look hard enough, you might turn up a used Paris/Dakar fender, but I wasn't overly enamored of the bulbous tip at the front and lack of vents at the rear. You see, I'd decided to relocate the oil cooler so I could install an H.I.D. driving light on the right crash bar, and the new location was right behind the new high front fender. While I was at the Touratech-USA web site ordering the oil cooler relocation kit, I noticed that they also carried the Acerbis high fender. Surprisingly, it was modestly priced (~$40) so I snagged one. They call it the BAJA, and it comes in white. All the better for re-painting, I though to myself. I remembered my buddy Louis complaining that the high fender on his R80G/S caught the wind and made the bike weave at high speed, but that he'd installed a brace, also from Acerbis, that fixed the problem. I couldn't find it at the Touratech site, but a call down to Mike at Fremont Cycle Salvage had one on the way. When the 'cooler and fender arrived I installed the oil cooler first. With that out of the way, I had to figure out how to get the brace hooked up to the lower triple tree. It was immediately obvious that none of the holes or slots provided in the brace would align with the threaded holes in the triple tree. So I was on my own to locate new ones. The brace had to be mounted straight, and use the existing threaded holes in the tree. What to do?
You must be a member to view complete articles on this website. If you are already a member, you can log in here. If you aren't a member yet, you can purchase a membership here.