This article was originally intended to be a series of articles on sidecars and sidecaring.  I decided not to do multiple articles.  I update this article now and then, date of which is at the end area.

When reading this article, you will see that I have included a considerable amount of my own travails in building my first street-going sidecar rig. I was exceptionally anal about building it to be very strong and reliable with very good handling.  YOU can take advantage of all my work, GREATLY simplifying YOUR work, by reading carefully, and referring to the Author’s website articles on sidecaring, which have many photos and technical details & descriptions not in what you are now reading.  You can save a LOT of time and cost.  There are also articles on how to drive a sidecar rig, and many hints and things to know.  http://bmwmotorcycletech.info/index.html

In my earliest Airhead days, I wrenched-on & raced sidecars: BMW /2 and some on the /5 bikes. I won’t go much further here into my track or dirt racing (2 and 3 wheels, BMW, Norton, Vincent). For sidecar racing, during and after my initial position as Wrench, I was often the ‘monkey’ on the platform.   Eventually I became the driver. Back then, I NEVER did any sidecar driving on the street. Over the many years since, I became more interested in street type sidecar rigs, but did nothing, besides attending many sidecar rallies; in particular, the one held in Griffith Park, Los Angeles area.  I was always there on 2-wheels….at least until the turn of the century.

In 2000 I drove a few miles in the countryside on Hal Thompson’s factory Ural rig and found it lots of fun, although I felt awkward (my lack of recent experience no doubt), and it felt very tall, no doubt due to the fact that a racing sidecar rig is VERY low to the ground. I began thinking more seriously about building a rig to compliment whatever solo bikes I had.  There were other reasons too… I’d been suffering for years with back deterioration; and thought then, that the handwriting was on the wall for my dirt riding, let alone solo road riding.  I also wanted something ‘different.’ After 850K or so on motorcycles I was occasionally bored. I had some adventure touring in mind and thought that now might well be the time to have a sidecar outfit for myself.  Serious attention to back exercises has since kept the deterioration of my back to a minimum, although still troublesome. I can’t see myself giving up two wheel riding, not hardly, not until maybe in my eighties. But the idea of a sidecar rig WAS…and REMAINED… very appealing.

In 2001 I built a sidecar rig for the street, an R100RT-Ural rig. It was very stoutly built.   I had it for quite some time. Some years later I purchased a rig and modified it extensively to my particular tasts, and I still have that one, a K1100LT-EML rig, with EZS tug equipment. I used both rigs on the street, occasionally hard-pack dirt roads, and sometimes drove them on ice and snow, and I have put a lot of long distance touring miles on the K bike rig, with my wife sometimes in the chair.  Over the years I have worked on a lot of street-going sidecar rigs that belonged to other folks.  I have seen some good rigs, and some awful rigs.  Sidecars need to be built Hell-For-Stout; and with real thought put into the over-all design.  They also absolutely must be aligned correctly, which is easier said than done.

Sidecar rigs are also known as ‘Outfits,’ ‘Combinations,’ Gespanne, and ‘Hack-Rigs’. The sidecar itself has had many names, including Hack and Chair.  Rigs are a lot of fun, & often attract a lot of attention from folks who would never think nice thoughts about motorcycles and motorcyclists. They can also be a PITA to learn to drive. They do NOT handle like cars, nor trikes, nor motorcycles. They change their handling characteristics in accelerating, and in braking, and handle totally differently on right turns than left turns. They are affected seriously by the changing crown of the road. They are more difficult, in some ways, to ‘drive’ really well, than riding a motorcycle; and can be more physically demanding….or, at least tiring. But, they are a lot of fun!   They are also one of the better answers for those who want to be ‘in the wind’ but have physical limitations.   Sidecars are NOT, however, just for ‘old guys’.  Sidecars allow you to ‘motorcycle’ even in the Winter.  They can carry a LOT, and even a single wheel drive sidecar rig can be usable on ice and snow.

You must be a member to view complete articles on this website. If you are already a member, you can log in here. If you aren’t a member yet, you can purchase a membership here.
END_OF_DOCUMENT_TOKEN_TO_BE_REPLACED
Open post 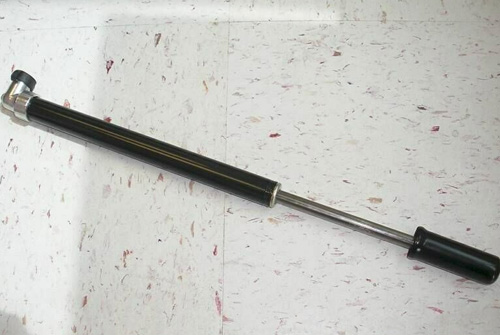 Here’s one left over from your grand dad’s day: BMW’s hand pump. This little gem is about 10″ long and fits easily within the top frame tube of a airhead motorcycle. That means it’s always with you in case you should have a problem with the air in your tires. It doesn’t need batteries, doesn’t hook to a spark plug hole, and doesn’t run on CO2. That means it will always work. A pretty comforting thought when your destination includes the ends of the earth.

About the only improvement I’ve been able to make is a little handle that attaches to the pump head that makes it easier to get it out of the frame. It’s made from a few loops of stainless steel safety wire and bent so that the loop sticks out of the frame far enough to be easily reached with your fingers.

You must be a member to view complete articles on this website. If you are already a member, you can log in here. If you aren’t a member yet, you can purchase a membership here.
END_OF_DOCUMENT_TOKEN_TO_BE_REPLACED

It is not easy to find these; especially for good reliable ones with plugs that do not release from vibration, etc….and at a reasonable price. I tested the following products for temperature, output, regulation, ETC.  Price is reasonable.  These connect to your motorcycles electrical system, either to the battery, or to the system after the ignition switch, or simply plug into an existing DIN jack (or, one you add) on your motorcycle.  These adaptors I recommend are NOT cheap cigarette lighter socket plugs but quality Hella-DIN types, that grip well into your socket.  All have 5 volt USB type outputs. Single and dual versions, either with 2.1 or 3.3 ampere ratings for output.