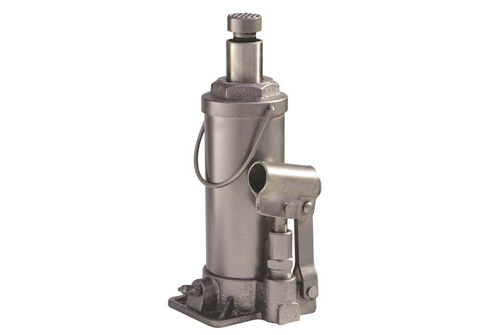 Above are two inexpensive 'bottle jacks'.  A 12 inch tall 'square' is in the center of the photograph, and a 12 inch ruler below to give you an idea of size. These two jacks happen to be the versatile types that have tops that screw-down into the jack pistons and those jack pistons are shown with jack pressure released, that is, down. Making an anvil if your jack does not have a particularly useful one, as in the photo, can be simply made from a piece of iron pipe, cut with a hacksaw to make a half round length. This can be much nicer than the bent metal type in the right side of the above photo that I made in a couple of minutes.  The hacksaw-cut type is also described in this article. The jack on the left has a top I made from aluminum stock. Below is a photo of my small scissors jack. It is rated at 2 tons. I find this jack quite useful. I have made a curved cradle for the anvil top of this jack, as shown. As on my other jacks, the curved cradle is rotatable. This jack cost only a few dollars a bit more than the inexpensive bottle jack type I discuss in this article.  Note how small this floor jack is....and it is also not very tall.
You must be a member to view complete articles on this website. If you are already a member, you can log in here. If you aren't a member yet, you can purchase a membership here.