Sometimes Tech Sessions just aren’t that intense. Such was the case at Bob Ellenbecker’s Tech Weekend at the end of July.

Originally on the docket were the replacement of some steering head bearings, repair of some cylinder studs, and a couple other things that escape me right now. The steering head job didn’t happen, but the stud repair did, and successfully. Kevin Birr supplied the victim, er, ah, patient, which was a single-shock R-80 with over 400K on the clock. On the left cylinder, both front studs were pulled. Fortunately there was sufficient knowledge, tools, and jigs to complete the task. The bike was on the road later that evening with no issues.

One attendee (Rob Himmelman) brought along two bikes, a “special” R90 with an interesting history, and a 1958 R26 that was a barn find. Change fluids, clean carbs, and install a battery was all he’d done to it before riding it. Rob was still in the progress of cleaning it up, but allowed folks to take it for a spin. The only thing he worked on at this Tech Day was investigating a lighting issue.

One other small item that was addressed was an R100RT owned by our host. Seems he had observed noise from the right cylinder, so he decided something might be amiss. Bob discovered that the exhaust rocker and shaft were damaged, and he found needles and parts of needles in the oil pan. Fortunately, Rob with the R26 brought along an entire rocker arm assembly (looked almost new). It was installed, all valves were checked, oil added, and the smoke test was completed — no smoke observed. It sounded just like an airhead.

Many thanks to Bob and Judy for hosting the event, which included lots of good food and drink, and even a local band on Saturday afternoon during dinner. Has a new standard been set? Of course, the Saturday afternoon soiree’ was also a party for a number of non-Airhead friends and neighbors. 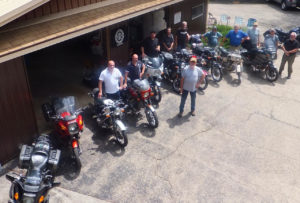 This article was originally published in the February 2022 edition of Airmail. Each month’s magazine includes news from the club, ride reports, technical articles on a range of airhead topics, and more. Get the magazine by becoming a member of the Airheads Beemer Club! Join the Airheads here!