This year’s SuperTech in Pennsylvania began with the cruelest of circumstances. The weather on Friday and Saturday was expected to be absolutely balmy for this time of year on the east coast, sunny with highs in the low sixties. Prime riding weather. But Sunday’s forecast for below-freezing temps and snow crushed most hopes of riding (though a brave few still did show up on bikes). Still, the weekend saw a cornucopia of learning that covered as wide a range as the weather that bracketed the weekend. 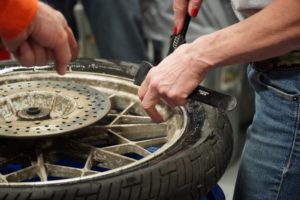 Friday evening saw folks gather for torque wrench testing with some crude testing equipment and generally chatting with old friends and making some new ones amid the displays at the Boyertown Museum of Historic Vehicles, where the weekend was held. After a few hours of swapping stories, everybody headed home to get some rest before the next day’s classes.

A bright Saturday morning brought the masses back to the museum for some donuts and coffee and an introduction from Chris Sutton and Rob Price to get everybody oriented for the day. After a brief orientation, everybody broke off to the area of their choice, with each chunk of the day being broken into three different spots. For example, at 9:15, with the caffeine just barely starting to kick in, you had to choose between Chris Sutton’s wheel bearing exhibition (primarily focused on the bearing setup for the /5, /6, and /7 series), Ken Roth’s push rod tube seal demo, and Jamie Theurkauf’s talk on Nikasil. Each part of the day forced you to make a choice between three different, equally interesting speakers and topics. The rest of the day saw talks on just about everything, including repairing roadside flats, aftermarket charging systems, carbs, aftermarket ignition systems, and a particularly enlightening talk from Anton Largiader about how that black magic box of all motorcycles—the transmission—works, and how BMW’s designs have evolved over time. Rounding off the evening was a lovely catered dinner, plenty of conversation to chew over the day’s panels, and a keynote speech (more of a discussion, really) from Greg Hutchinson, longtime chair or head of this and that BMW club. 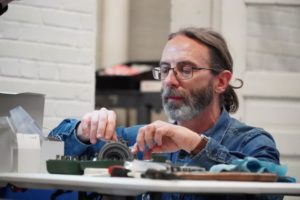 Sunday saw a reconvention of the clan for one last decision to be made between panels—do I want to hear about ethanol vs. gas or see a head stud repair? Or think about bean cans?—and then a final session of chat before the final awards and closing of the events.

Even in this part of the year that’s more or less outside the riding season for us east coasters, SuperTech was a chance for folks to revel in the camaraderie of these old machines and learn a little more about how they can be best kept on the road for plenty of safe miles well into the future.

This article was originally published in the April 2022 edition of Airmail. Each month’s magazine includes news from the club, ride reports, technical articles on a range of airhead topics, and more. Get the magazine by becoming a member of the Airheads Beemer Club! Join the Airheads here!