Maybe you were lucky, ,obviously the floats were stuck, its much harder on a bike to sit than it is to run it hard.  How did it run after this incident ? If the answer  is not very smoothly, it will be ready for a full carb cleaning.

Took a lot of cranks to finally start but once it did and warmed up it ran like a top. I am going to ride it tomorrow to run a good amount of gas through it and hopefully that will be it. Just need to ride more often until it sells! Needs all the fluids changed looking into doing that soon.

@ First ! If the float was stuck, there's a high probability that some of the fuel went into the crankcase with your engine oil. Pull the dipstick. Check your oil level for having risen. Then smell the dip stick. Smell any fuel there ?

I know you said you had the petcock turned OFF, but usually you have a 2-tier protection scheme to prevent fuel in the oil: petcock and float bowl valve. If one failed, there's no way to know the other hasn't also failed. If trash is in one, then it came from the fuel tank and traveled through both forms of protection. See what I'm saying?

@ Secondly, you were not "simply lucky". Your bike is talking to you, and you may not be listening. The only cause for a 'sticky float' is two things: trash in the fuel system, or old and tired float needles. Both are highly likely.

TRASH Pull the petcocks out of the tank. At this age, Airheads are loosing the coating on the inside of the fuel tank. It flecks off in tiny pieces and may travel through the fuel system. Also at this age, your petcocks may no longer be wearing their brass fuel screens. They need to be present on both petcocks. If not, then you definitely need to add external fuel filters. 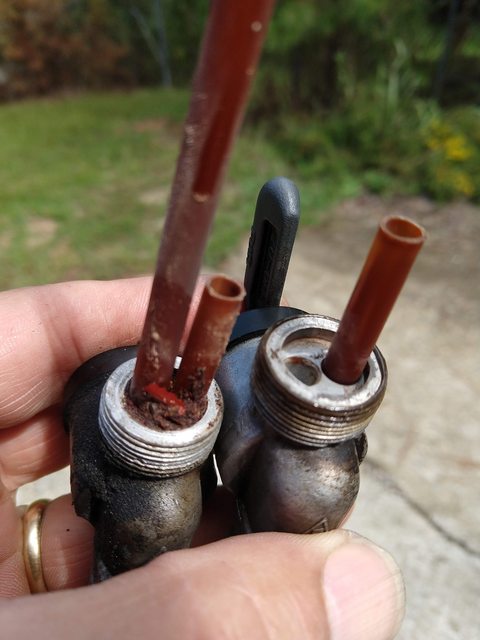 Typical tank sediment that naturally occurs within your fuel system

Shown before (LH) and after (RH) cleaning

FLOAT NEEDLES The float needles in a R100 are Viton-tipped. Eventually the ethanol in the fuel attacks and hardens the tip to where they are no longer pliable and able to seal. Please replace both needles if you do not know when this was last done.

PETCOCKS You can also replace the neoprene "packing" inside the petcocks. A 3 minute job.

FUEL HOSE Ethanol fuel attacks the older types of fuel hose causing tiny particles to break off and travel to the float needle, where they can also jam the valve open. If your fuel lines are not marked "SAE J30", then all the hose MUST be replaced.

@ An effective strategy to combat this situation would be to start a habit of always turning OFF the fuel about 1/3 mile from your garage. The engine will continue to run on the existing fuel and eventually lower the level of fuel in the float bowl. This space becomes a "safety buffer" that 1) keeps the jets high and dry and prevents ethanol fouling, and 2) allows the petcocks to weep several tablespoons of fuel without doing any harm. This costs nothing, but could save you a big repair bill.

All this probably sounds extreme at first hearing. You're not accustomed to doing any of this with the family car. And you are thinking "this guy is off his rocker". But you are not thinking correctly when you unconsciously compare your car to your Airhead.

- Your car is modern and was built during the age of Ethanol fuels. Airheads were definitely not built during the same time frame. Your Airhead also has a 30+ year head start on building up fuel tank sediment.

- Your car has the fuel tank below the engine. Fuel must be actively pumped up to the injection system. Therefore, you have the luxury of not thinking about your car's fuel system when the engine is OFF.

Conversely, your Airhead has the fuel tank above the carbs and fuel flows down to the carbs by gravity. To my knowledge, Gravity has not been turned off since it was first discovered by Mr Newton in 1679. Therefore you do not have that same mental luxury with the Airhead. Owners need to be considering maintenance steps to take and preventative procedures to employ 24/7. This simply because Gravity doesn't take any holidays !! This is one reason I strongly recommend emptying the entire Airhead fuel system for storage longer than 2 months.

The question was in reference to an Airhead, and so I have written a response in answer to that question. But the Airhead does not represent a specific or special problem case. It is typical to all motorcycles in which the fuel tank above the carbs (that is to say everything except the Gold Wing), and also... lawn mowers, garden tractors, riding lawn mowers, and a wide selection of other motorized devices common around the home.