My R60/7 just shut off on me after I filled it up with gas, and started leaking gas from the carburetor. Now I can’t get it to start and gas keeps leaking from both carburetors. Not sure what to do, any advice would be greatly appreciated.

This is my first post, sorry if I’m using the forum incorrectly.

These leaks are caused by 2 things, both closely related to the fuel system's float bowl. The float works just like a toilet, so if you can fix a "running toilet" then you can fix your Airhead carb leak.

1) Trash in the float seat. The "float" actually does float on a pool of fuel. This in turn applies pressure to a "float needle" that seals off extra fuel from entering the float bowl. The float needle seats itself on a small orifice through which fuel flows when the valve (formed by the needle and seat) is open.

However, small pieces of trash, tank rust, sand, cat hair, etc can hold the valve in the open position. When that happens, safety openings in the carb body allow the excess fuel to exit the carb before entering and hurting the engine.

In cases like this, you should immediately turn the petcocks to the OFF position. If you can get the engine to start, sometimes the vibration of the engine or the rush of fuel back into the float bowl will wash out the trash without doing anything else. Other times you can ride home by manually controlling the fuel in the carb by turning the petcock ON / OFF with your left hand while you control your throttle and steering with the right. Not great but it sure beats walking.

2) Worn out fuel float system. Excess fuel can also be allowed to flood in when carb parts get old. That is to say BOTH floats and BOTH float needles are worn and simply need replacements. The ethanol found in most fuels in north America is pretty rough on plastic and "rubber" parts. If you get 10 years life out of fuel lines and other internal plastic parts, then you've done really good.

Bing has issued new parts that resist the ravages of Ethanol much better than the OEM parts. If you do not know the exact history of these parts inside your carbs, then these parts need to be replaced. The parts are inexpensive and a simple Cost-Risk Analysis will prove that your weekend drive will be much more enjoyable if you don't need to hitchhike home. It's difficult enough worrying about all the other items that could go wrong on a 40yo motorcycle, without leaving for a ride with items KNOWN to fail !!

>> If your problem is rooted in "#1 Trash", then obviously if trash happened once, then trash will happen again. The addition of small in-line fuel filters (one on each side) will effectively end the chances of a second occurrence. Again, these items are very inexpensive when compared to the benefit.

>> If you decide to replace your fuel lines, then you should look for fuel hose marked "SAE J30", which is the new Ethanol-proof fuel line spec.

Thank you so much for your reply, this is a huge help! Based on the information you provided, I believe it's trash/debris that made its way from the gas tank... but what do I know? After looking inside the tank it's looking a little rusty and like it needs to be cleaned out, so my guess is that I dislodged some debris in the tank when I filled up the bike. I dropped it off at the mechanic today so that he can take a look at everything it needs, including the carburetors/float systems. I also asked him to add the fuel filters you mentioned to both carburetors.

I'll update the post once he gives me some feedback.

I really appreciate the tip you gave me on manipulating the petcocks to be able to ride the bike home. I just wish I would've known this sooner as I ended up pushing the bike home on Saturday, but luckily it was only about 5 blocks. It wasn't all in vain though, I was able to get the bike going this morning using your advice.

I'm excited to learn more and more about these bikes. My brother passed away recently and I'm taking care of of his airheads, I plan to keep them all going.

Thank you again for your help, it is much appreciated!

There's not really much a mechanic can do to a tank in 1 or 2 hours, which you might consider a "normal" shop fee. The true repair is going to entail removing all the old interior coating and adding a new one. But that entails harsh chemicals and the possibility that some might slosh out onto the paint job. Plus, your mechanic does this job once a year, so he's not going to be very practiced or expert at the process. In short it can only lead to a short term fix done at a very high cost.

However with filters, all the trash is kept from going into the carbs and you get the same effect for under $15. If you have several bikes, you might as well buy enough for 2 for every bike and do them all. If you know how to use scissors, then adding filters is work you can do yourself.

If you inherited several bikes, then I urge you to start doing these simple tasks yourself. All these repairs will show up on each bike eventually, and you can't keep shelling out $200-$300 for each one, much less wait the 6 weeks for the work to be completed. Doing the simple tasks is how you learn. The BMW was planned to be simple enough so that the owner could do MOST of the work themselves. It's the entire point of the huge tool kit that came with the bike. If you are not familiar with your bike, then what will you do when you're 75-100 miles from home ?

Let the mechanic do the big jobs: tire changes, clutch, push rod tube seals and the like. You can do this.

Thank you for the honest advice. What you're saying makes perfect sense. I didn't realize what "cleaning the gas tank" entailed, I appreciate you explaining that process. I have 0 experience with bikes or cars, but I'm going to have to man up and learn as I go. It's definitely what my brother would want me to do. I was worried about removing the carburetors and having gas leak everywhere, since I live in a condo building, but I'm just going to have to figure out a place where I can work on them outside of the building.

Overall I think it was a good thing that I dropped this bike off at the mechanic, so that he can take a general look at the bike and make sure that everything is in good condition. Even though the bike seems to be in great shape, it will give me more confidence riding it at the very least. Funny enough (not really) when the mechanic turned on the bike the carburetor was not leaking anymore, so I guess the clog cleared itself like you mentioned it would. However, I am going to ask him to add the filters to the carburetors while he already has the bike. Moving forward I will do my best to learn how they work and how to fix them.

Thank you again for all of your time and help, you have no idea how much I appreciate it. I'm really glad I found my brother's membership to this club, he was a big fan.

Moving forward I will do my best to learn how they work and how to fix them. Thank you again for all of your time and help, you have no idea how much I appreciate it. I'm really glad I found my brother's membership to this club, he was a big fan.

Most of the "work" boils down to small, simple maintenance tasks that are carried out proactively. Changing the oil and filter every 5000 miles, greasing the various points once a year, checking the tire pressure weekly... that kind of stuff. While you're doing those tasks you'll see things like gashes in the rear tire, which you can deal with via a shop rather than as in accident on the road.

You got to do this because you're not riding a motorcycle, you actually operating a 40+ year old classic vehicle. You can bring this understanding home in a hurry if you simply ask yourself... of the 10,000 cars you saw on the road today of any make or model, how many were made the same year as your Airhead ? NONE !

Yes, the interior of the Airhead tank was anti-rust coated at the factory. After 40 years, flecks start to break off. Most are large and won't pass through the screens, but as in any random sizing there are always several in a million that are large enough to slip through the screens and yet small enough to hold the float valve open. Poop happens ! Sometimes these will wash out by themselves, especially if you'll ride with the fuel taps turned OFF. But then that same trash is collecting in the bottom of the float bowl where it can get into more mischief. Filters ween't needed 20 years ago, but times have changed.

Here's a view of what was collecting on the top of my 1979 RT fuel taps when I removed them. One has been blown off for comparison... 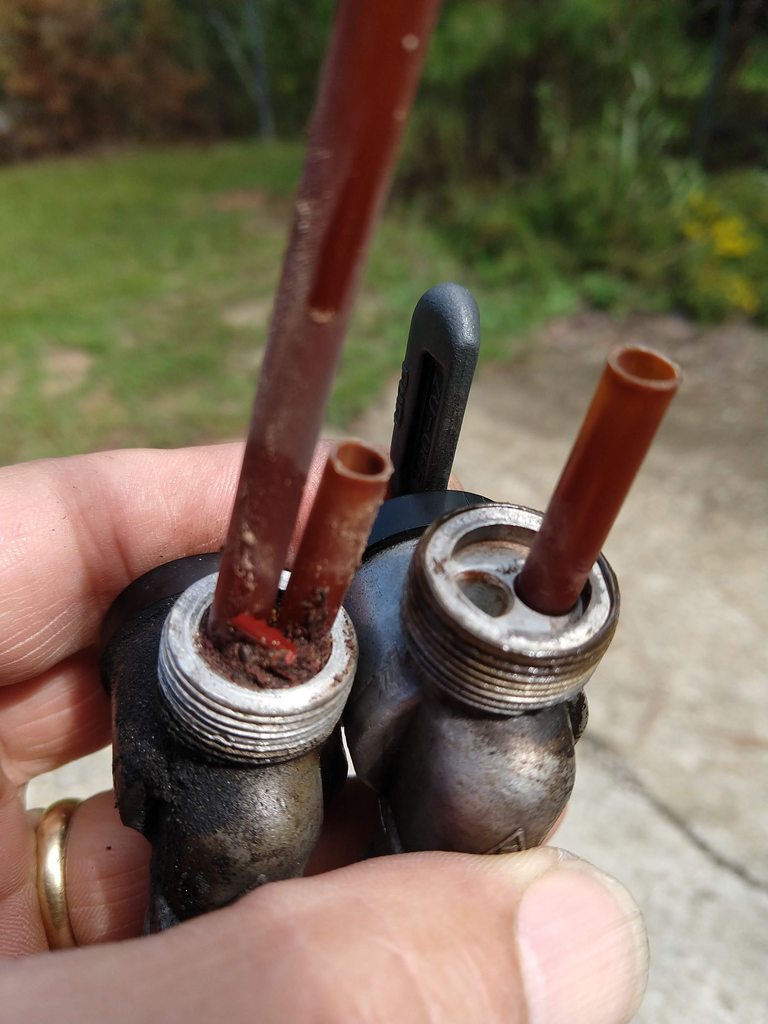 All of that gunk accumulates in only about a year of use? Thank you for showing me that picture and for all of the golden nuggets you've given me. I was trying to figure out what kind of regular/proactive maintenance these babies need and how often, so this was a huge help. I'll make sure to follow your recommendations of changing the oil and air filter every 5,000 miles, as well as checking the tire pressures weekly.

Would you mind explaining to me which points should be greased yearly? I was under the impression that they didn't need to be greased because of the shaft drive, but clearly I'm wrong.

As always, thank you very much for your time and for all of your help. I will try my best to be less annoying moving forward.

All of that gunk accumulates in only about a year of use?

Oh no, that was about 15-20 years of accumulation. The only point was that just because you don't see it or think about it, doesn't mean it's not happening.

Points I like to grease every year would be the cable end "barrels" inside the op levers, the clutch pivot arm, both sides of the swing arm (under the black plastic caps), the rear brake lever, and the "splines" that join the rear wheel to the final drive unit. There are other places with grease (like the wheel bearings and head post bearings), but those have their own schedule.

I think a full maintenance schedule is beyond the scope of a forum conversation. You need to consult your owners manual, and use that in combination with this forum, your shop manual, the Snowbum Airhead website, AND your local Airhead group's Tech Days. I cannot stress strongly enough the need for you to contact your local Air Marshal (each state has one) and get on your local group's schedule to attend a local Tech Day and ask these same questions.

Thank you so much for all of the information you've given me!! I'm going to put it to use.

I'm contacting my local Air Marshal so I can get the schedule.

You've been an enormous help, and you've given me some confidence to start wrenching.

I'll talk to you soon. Thank you again for everything.