TLDR; I have loud LOUD LOUD valve clatter and nothing I do to fix it works.

I have a 1981 R100 with 83000 miles on it. When I got the bike about a year and a half ago, it had sat for 5 years, but otherwise was in great shape. I replaced some rubber bits, fluids, tossed a new batttery in, and it fired right up. It was not without its own problems, though. The valves were loud(esp. the right exhaust). Like forks-in-a-blender, drop-a-bucket-of-bolts loud. When the valves were freshly set, it they'd tappy-tap-tap for a couple dozen miles, and then go right back to hammering away; on subsequent rides, they'd get loud as soon as the bike was warm.

I then ended up doing some major work on the top end for several reasons. Work as follows:

rings -> the jugs were already off and she was 83kmi old; also the ring gap was in the gray area of replacement

exhaust valves and seats -> valve clatter and off spec

all 4 valve guides -> clatter and MASSIVELY off spec

I fixed all the leaks, but became obsessed with the valve clatter. The noise itself did not worry me, but the rapidity that the valves resumed their racket kept me up at night. I would set them, then they(esp right exhaust) would start quiet, and by the end of the first ride, be just as loud. I'm used to valves tightening up, not loosening! Luckily, it  seems that the clatter reaches a crescendo and maintains a steady volume after the first ride, but it still bothers me. It's too metallic.

Last week, I was at the dealership bemoaning the issue to a friend and airhead tech. We listened to the engine and he suggested that I replace the valve adjustment screws. DOH! Why didn't I think of that? The pitch on those threads is so fine! After 83k miles and 40 years, they or the nuts must have been stripped.

So I did that. I put new adjusters in, re-inspected the rocker arms,needle bearings, and oil journals, pushrods etc. I warmed the bike up(half choke, then mild idle for a few minutes), rode around for a bit, and 10 minutes into the ride, kah-dink-kah-dink-kah-dink-kah.

I realize in the scheme of things, this is not a terrible issue(I hope...), most likely just causing slightly accelerated wear. I have good power, good cold starts, good oil flow(tested with valve covers off for a quick second). It's just eating me alive what could be causing this problem! Do you all have any ideas?

I don’t have answers, but I’d like to ask a couple questions for clarity;

1. Regarding the work you had done - are you saying you now have new exhaust valves and exhaust valve seats, plus new valve guides all around?  Just want to verify what you are saying. And the same noise persists?

2.  When you adjust valve clearances, and things start out ok, but then very soon the loud noise returns, does the valve clearance(s) actually open up (when you re-check)?  A bunch?

We will need smarter help here.

2.  When you adjust valve clearances, and things start out ok, but then very soon the loud noise returns, does the valve clearance(s) actually open up (when you re-check)?  A bunch?

This is an excellent question because if the clearance is loosening up, then the camshaft could be experiencing rapid wear. This could have been caused initially by running with the clearances too tight and/or using the wrong grade of motor oil. Many people think that the camshaft is "hard" metal all the way through, and this is not the case. Modern camshafts are typically hard only on their surface, and that hardness is paper thin.

But before we go there, we need to know if the measured clearances are enlarging.

This post was modified 3 weeks ago by Richard Whatley

1) yes. your assumption is correct. new guides all around. New seats and valves for exhaust only. The guides were worn to an extreme level. I put in nickwackett alloy guides, seats and valves.

2) I can check this when I pull it apart next. When I did the top end, I looked at the lifters and pushrods all around to check for wear, but found none; no pitting, galling, asymmetrical wear, however, I didn't pull the cam, so I can't verify that the lobes are in perfect condition. That is scary.

I set the the clearances at the specified .004 and .008 as specified in my manual and my intake valves are happily ticking away. From my memory, 3 of the valves move very little, if not fractions of a thou IN, like they are supposed to. The 4th(right exhaust) I'm pretty sure either stays where it is or moves a fraction of a thou OUT. However, this motion does stabilize. Rocker arm end play remains stable.

I can pull the cover off real quick before the snow this afternoon or tomorrow and get back to you on that. Thank you both so much for your replies, @wobbly and @4949. I was also thinking it could be something in the rocker arm itself and will pull that one when I examine the clearances. When I rebuilt the top end, there weren't any glaring issues like tappet wear/pitting or needle bearing deterioration or galling on the rocker shaft.

@wobbly regarding oil, I use 20w50 during all seasons. I live in New Mexico, so the coldest weather I ride in is just about freezing. However, to prevent wear during winter, I put a poultry heating lamp under the bike on a timer to warm the sump and oil before I am about to ride.

@wobbly regarding oil, I use 20w50 during all seasons. I live in New Mexico, so the coldest weather I ride in is just about freezing. However, to prevent wear during winter, I put a poultry heating lamp under the bike on a timer to warm the sump and oil before I am about to ride.

I was referring to the API rating of the oil. SM and SN is what's on the shelves for modern cars with catalytic converters, but the older Airhead engine needs SF, SG or maybe SH with the 'zinc package'.

However, if the lifters showed no wear, then it's doubtful if the cam they ride on could wear that much. I've only heard of one camshaft going out, and so my comment was a "reach". Grasping at straws.

The only thing left is improper valve clearance adjustment procedure.

I was referring to the API rating of the oil. SM and SN is what's on the shelves for modern cars with catalytic converters, but the older Airhead engine needs SF, SG or maybe SH with the 'zinc package'.

I use SG rated oil. Is is possible that during the first 80 or so thousand miles of its life(before it came to me) it was excessively idled on its side stand, thus creating a right side wear pattern due to unlevel oil distribution? Similar to older police motorcycles, which would be parked on sidestand during traffic stops.

I was thinking of keeping the head together and sliding the whole jug out and snaking a borescope down there to see if the case hardening on the cam lobe is worn. Could that resulting retardation/improper full valve lift could explain the noise?

Lots of things can explain the noise. Let's start with the 2 questions already asked...

@benjamin-greene If your lifters looked good, then I doubt your cam is shot. If you decide that you do need to look, you can also get a pretty good view by removing the oil pan.

Sorry for the late reply as I've been busy with work resuming.

After adjustment, the right exhaust is slightly wider, by which I mean part of a thou the others seem to stay decently adjusted.

My adjustment procedure is as follows:

I have turned to in-person expert help. I have a trusted friend who is a master tech, and I asked for his advice. I'm decent at fixing things, but I lack the experience that folk with a career in this field obviously have. Like I stated before, the performance of the engine was never an issue, so I decided that if he gave the me go-ahead, I would learn to accept that I have a talkative engine. This past weekend, he gave the bike a go-over and confirmed that he could find no wrong.

For my next oil change, I'll drop the pan and give all the cam lobes an in-depth inspection and make extra special sure there's no flakes or particulate matter in the inevitable sludge.

Thank you guys so much for your advice. For now, I'd consider this tentatively solved, as you and David both have outlined several possible causes that I can look into, worst case.

I will post back to this thread, tagging you both when I either a) drop the pan and can ascertain the condition of the cam/lifters or b) experience an extremely unlikely catastrophic failure.

My next project is to beef up my charging ability a little bit, as this winter is testing my system's limits.

Just to double check and because you are new to engines and engine repair....

• The 4-stroke engine cycle takes 720°, or 2 full rotations of the crankshaft to complete.

• The "opposed twin" Airhead engine has both pistons moving together. That is, both pistols are at the same measured depth within the cylinder. That means BOTH pistons come to TDC at the same time.

• Thus, while both pistons are at TDC... you can only adjust only ONE set of valves (one cylinder's valves) at TDC.

• To adjust the valve clearances... Bring both pistons to TDC.

• One set of valves will be opening/closing (rocker arms tight)... Only adjust the valves on the cylinder with slack rocker arms.

The following cartoon tries to show the valve action... 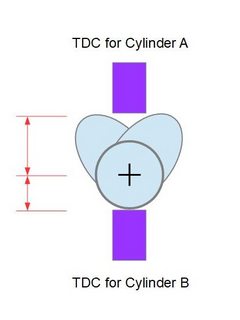 • Rocker arms on Cyl A will be tight because both are being held open by the cam lobes. Therefore, it is time to adjust the valve clearances ONLY on Cyl B.

• After adjustment, the crankshaft is rotated 360°, which rotates the camshaft 180°. Cyl B rocker arms become tight due to the action of the cam lobes, and Cyl A rocker arms go slack and can have their clearances adjusted.

► The point is, when you go to adjust the valves you have absolutely no idea where the crankshaft stopped. Bringing the engine to TDC by the flywheel mark is NOT enough. You MUST open BOTH valve covers and observe the action of ALL the rocker arms near TDC because only one cylinder can have its rocker arm clearances adjusted.

This post was modified 7 days ago by Richard Whatley

Thanks for the diagram. I often turn to stuff like this to help wrap my head around new concepts. I am new to THIS engine, but new to neither automotive nor tractor repair. As always with new situations/projects, I make sure to thoroughly research any procedure I am about to undertake. I own Clymer's(or hayne's) manuals for all the vehicles I maintain and religiously read Snowbum's posts before I attempt anything with my airhead. In regards to your point, I only adjust valves and endplay after rotating the crankshaft and observing the valves' action on both sides with the covers removed as clearly stated in the manual. I will keep you posted as events arise. Again, thank you so much for your explanations and advice.

Since we haven't found anything else, I took a shot in the dark in hopes of helping. No offense intended.

@wobbly None actually taken! I am almost always the youngest person in all these types of work-groups, so I can get prickly about my pedigree 🙂