Franklin Scharppslicer
(@swordofwords)
Posts: 27
Eminent Member
Topic starter
1983 R80RT,65K,  the yellow on on Airhead.org and my Youtube (Franklin Scharppslicer).
A gentleman who rebuilds Airheads from Idaho took the carbs home with him to rebuild.  He's
rebuilt tons and they came in beautiful !
I installed them and started the machine.  Idle was about 2500 - 3000.  I hopped on to put
on about  10 miles so I can balance them.
Similar to the video (Youtube) In gear ,which was slow and gummy, First gear it would lug to stall, but I let the combination of pulling in the clutch and let the  RPM kind of nurse me around the block. Then it
rained heavily, so I postponed it.
I drained the gear oil, expecting  it to be gooey, it was not, but I put Seafoam to let it slosh around before I drained  it for new gear oil.
Next day: gas cocks  on, fired up.  RPM's high, and the left carb was dumping gas almost as fast as
just pulling a fuel hose (new).  Pulled the bowl and it was clean, the little tube was clear as was the corner port.  Turned left gas cock on, fluttered the floats to remove suspected debris (none), but with
the floats up, it was still dumping fuel.
Somewhere between the first start up and the next day something happened.  Fresh fuel.  What should I try next.  I'll try to video it for the "Ah! Zere ist your problem, Old Pleb!" maestros.
Michael A Bailey
aka Scharppslicer
Casper Wyoming
1958 R69
1983 R80RT
Posted : 09/23/2020 08:25
Topic Tags

Well there's the issue right there. You should be running Bing carbs, not Wyoming carbs. ?

It's most often debris introduced from an older fuel tank, or it's the interior of the fuel line breaking free as you push the fuel lines into place. If it's from the tank you can remove the petcocks and a great amount of trash will be settled as sediment on top of the petcock. Looking like the one on the Left... 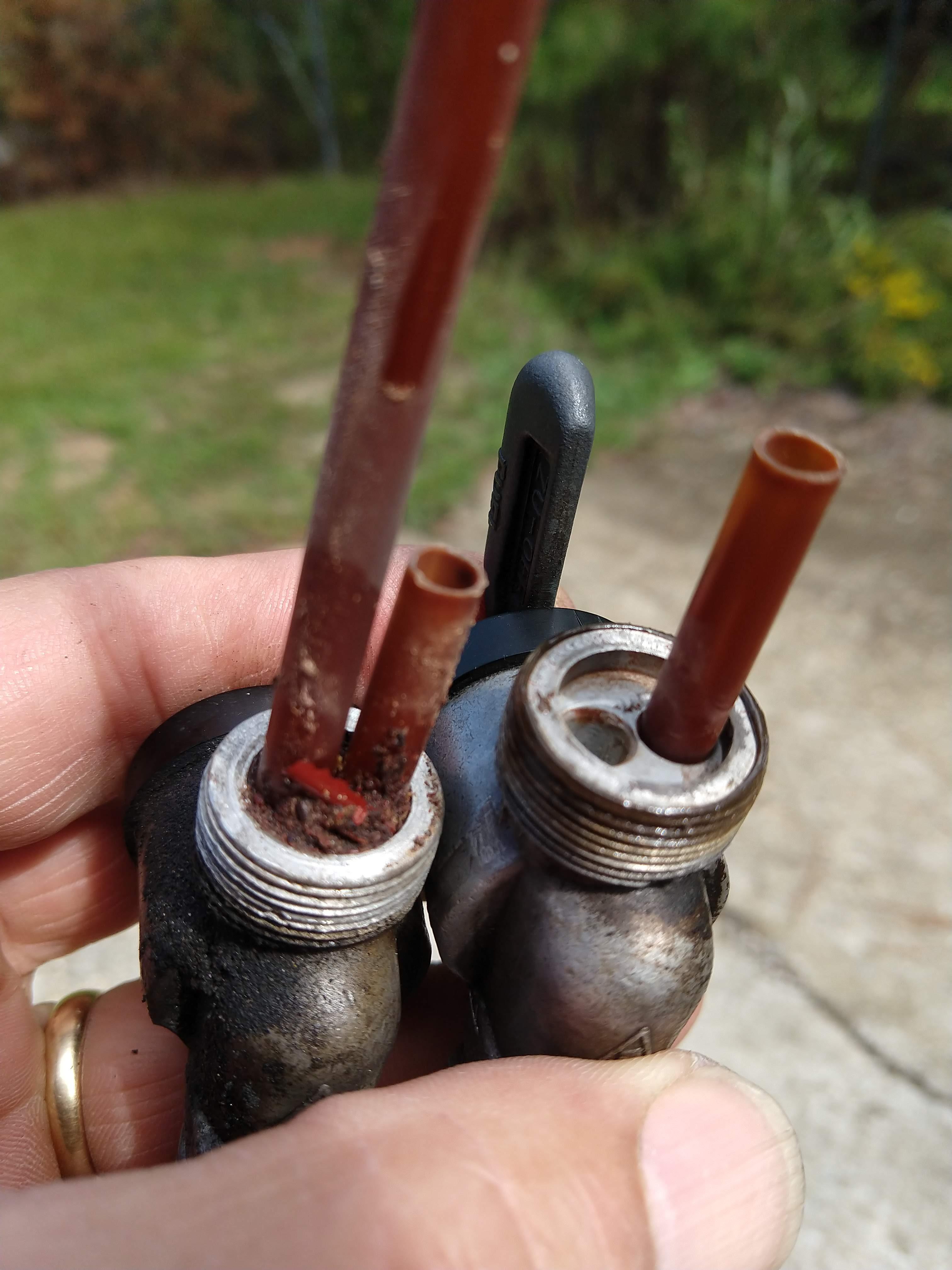 The only fuel line you can trust these days is marked "SAE J30". If it is not, then it is not rated for ethanol laden fuels and will rot out in record time. I highly suggest all NEW 1/4" ID automotive fuel hose marked as such. And take the time to add some fuel filters just above the carbs.

Either way, you'll still need to clear the offending debris from both float valves with compressed air. While you do that, you can inspect the float valve needles themselves. The viton tip should be perfectly conical, with ZERO signs of a divot or depression where it has been seated against the brass float valve seat.

Franklin Scharppslicer
(@swordofwords)
Posts: 27
Eminent Member
Topic starter
While hunting down the proble, just as suggested of putting a stong magnet in the oil pan;
would there be any help or harm dropping on in the gas tank? would it pick up debris ?
Michael Bailey
Casper Wyoming
Posted : 09/25/2020 09:04

No. In my experience its mostly flecks of the BMW tank sealer, sand and grit that got into the tank, and bits of the pickup tube flaking off after 40 years. None of which is magnetic.

Do a test. Set the tank on it's side and pull the higher petcock. You'll surely have a collection of grit as I did (shown in the photo). Stick a magnet in it and see what percentage is magnetic.

What did you find in the float valve and float needle ??

I don't know where Wobbley got those pics of the petcocks. I have never seen any like them. All petcocks have two straws and a screen encasing the straws. If there is gunk at the base of the straws the screens were not seated EXCEPT some /5 carbs that used the early screens that broke eaily.

Testing the float valve is simple. Petcocks off. Remove a float bowl. Hold the float up with yourr finger until the ball in the top of the needle is depressed into the needle slightly (ie, the position the float swould be in when gas is shut off). Turn on petcock. Ga should not flow through needl valve. If it does service the valve.

There is much talk of junk from the tank getting into the valve. If it does the valve clogs, rathere than leaking. The decending flot (as fuel is used) pulls the needle down hard allowing fuel to flush th valve orifice.

I like ridges on my ruber needle tips. More surface area to seal. To each teir own.

Relly big leak: look at fuel lines if not spannking new (esp. the brided stuff). The line nipple going into the carb can also leak but not so common.

Sorry about the typing. One of my eyes fell out and its been a long day of correcting stuff.

Well, as a matter of fact those petcocks came out of my 1979 RT. They had not been disturbed since about 1983.

All Airhead petcocks STARTED OUT WITH 2 straws and 2 screens, but after 40 years and several owners you can't always count on a full compliment of original items.

There was a naturally occurring gathering of particulate matter at the top of the petcocks, and it's name is sediment. Sediment is exactly why BMW fitted the 2 straws, so as to not accept fuel off the very bottom of the tank. The absence of the 2 missing screens is exactly why I run 2 in-line fuel filters. In 1979, brass screen was about all they had. These days they've developed plastic mesh with half the cost and twice the filtering effect.

A single piece of microscopic trash holding the float valve open (rather than clogging it) is my pro experience in the vast preponderance of cases. Gasoline is a very small molecule and it simply doesn't take much of an opening to allow it to pass by the float needle.

The viton tip on the float needle is there exactly because it is soft and is able to conform to the float needle seat. In this way it makes a better seal. If the float needle tip has taken a "set" and is displaying a permanent indentation, then that is clear evidence that the tip is no longer soft enough to conform to the float valve seat. Sure, it may not be leaking at that exact moment, but the evidence is clear; its useful life is nearly spent. Therefore you replace the float needle while you have the old one out. If you put a worn float needle back in, in spite of all the evidence, then you run the risk of doing the same job over within 2 months. And Mr Murphy's Law predicts that will be when you are 300+ miles from home. Besides, this is no longer 1980. These bikes are 40+ years old now. In 2 months you'll probably have a new electrical or wheel issue demanding your attention. Do you really want to revisit the carbs in the middle of a new electrical issue ? I think not. It's been proven over and over... "Deferred Maintenance" is the shortest route to the scrap yard.

I also have a 1983 R80 RT, and kept finding tiny red bits around the filter screens, and in the carbs.  Finally recoated the inside of the tank, and now the screens and carb internals are staying clean.

if you were finding bits in the carb bowls then the filter screens were not working correctly.

if your tank reline is still solid in 5 years you did it well. new paint always looks goog

Pulled bowl, no sediment. Pulled top, stretched the choke spring, Checked needle which was nice and pretty.  Got new choke spring, reinstalled carb, put my inline filter back on, tightened all clamps.  Opened petcock AND....gas spewing. Not from the bowl.

Turned cock on enough to get get fuel and turned it back off. Turned engine over, choke open; started right off at 3K RPM and noticed smoking from head.  Keeping the 5lb. CO2 fire extinguisher handy while things cook off.  Periodically turning g. cocks on and off just enough to keep feeding fuel, but not enough to spew.  Grabbing my helmet to dry to hobble warm up ride to adjust carbs AND...right center stud loose. Albatross!  I try to screw it back in, nothing but spin.

Guess Im going to remove right valve cover  to see if I'm entering the world of heli-coils. I know this should all be therapeutically

Followup on the follow-up:  Almost five minutes after my last whiney post,  I went out stared it up again, turned the peacock on and no leak!  What?!  So, setting that miracle aside, I turned the screw in about five clicks, started it again, and the arch was way low, so I turned in in on click, starts d.  IT was a bit better, then two clicks on each; much better.  I know I will do better when doing the official balance, but I wanted to see if the engine would dog and lug, it would not.  Maybe it IS therapeutic, because I am way happier!

Riding it to get the fluids to get vs k into circulation, the shifting was like shifting like it is in tar.  I put Sea Foam in it to drain before I put in New gear oil, so if there are any hints,let me know, as. It accelerates pretty well, it is just a mother to shift through the goo.

If I didn't say thank you for everyone's input, I'm doing so now.  It is going to rain and or snow  in a few days, which will be good for our Wyoming forest fire, echo means once everything works out, it WILL snow.  Wish I. Would do that voodoo for California's fires!