Does anyone have a guide or measurements for wheel offsets for re-spoking R100 wheels? I’ m re-spoking a ‘77 RS and need the offsets in mm’s.

Actually you don't need the dimensions at all !

As with any technical problem, you are always better off to start with the Laws of Physics, Laws of Geometry, or whatever rules govern the subject. In this case you'll want to know the truth of motorcycle front fork design, which says "All front rims on all motorcycles are exactly centered between the fork legs". This truth applies regardless of rim width or diameter, type, brand, model, etc.

So, understanding this, the process proceeds as follows...

• First lace up the wheel and work to remove all the "up and down". When the wheel is to that point, but still in the adjustment stage, you can reinstall it (without tire) back into the bike with the axle snugged up.

• From there take caliper readings from each fork tube to the outside of the rim. Your work then is to migrate the rim's "offset" toward the side with the larger dimension. This is best done by installing a loose fitting nut/bolt pair (let's say M6x25 or anything else laying around the shop) to use as a "position marker". Then working (from the "marker") all the way around the rim until you come to the marker again.... loosen the spoke nipples on the smaller fork dimension side by 2-3 spoke nipple flats.

• Immediately follow this up by (again working from the "marker" until you get back to the marker) tightening the spoke nipples on the opposite, large fork dimension side by the exact same number of spoke nipple flats.

• Exactly one time around loosening the 'small dim side' nipples, followed by exactly one time around tightening the 'large dim side' nipples. After which you make another caliper measurement. Repeat as required. The rim will slowly walk over until both dimensions are within a MM of each other. And by doing this, your initial work to remove the "up and down" will be conserved.

• From there you can do your final truing and tightening either in the bike or back in the wheel stand. 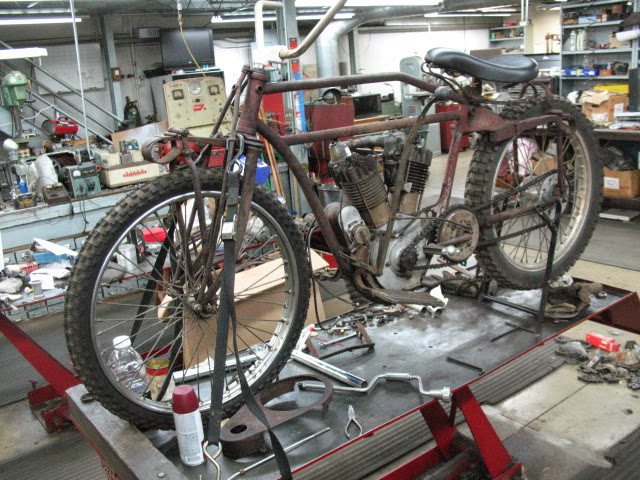 I've used this method on hundreds of classic bikes for which the offset dimensions have been lost to the ages. Vincents, Ariel Square Fours, Indian-Enfields, Manx Nortons, a 1917 Indian Scout with girder front end... it works every time. And more importantly, the bike will steer and "track" correctly going down the road. And most importantly, the result achieved is MORE accurate in its effect than any published offset dimension that you might find !

[The 1917 Indian Scout (above) was raced (and finished) 3 times in the "Race of the Century". This race is for bikes over 100 years old during the Barber Vintage Festival held every October at Barber Motorsports Park. The track at Barber is rated one of the toughest road courses in the US.]

Thanks, but I think this is what I was looking for.

Are you saying the rim is not centered between the fork tubes ? Just asking.

Measuring to the edge of the rim works ONLY if you use the BMW rim. And then, ONLY if BMW hasn't changed design or suppliers. As soon as you sub an Akont, DID, or any other brand, then all bets are off. This also means you can't swap a WM2 for a WM3 to get a different tire profile.