Forums
Airheads Forum
Airheads Discussion...
Is this a record pr...

Is this a record price? Made me feel damn good about the one I have in my garage (mine's not this nice).

Having seen many of the bikes in person that David has brought to BAT they are all super nice, well preserved and extremely well presented.  You would not have gone wrong purchasing this one and it has gone to a good home.  The auction had all the right bidders in the room at the same time...and that’s what brings the $$.

For that price you could buy a Vincent.

But on the other hand... if you actually wanted to leave your neighborhood...

It seems to me UN-restored BMW's are fetching more these days than perfectly restored bikes? 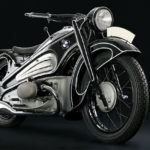 The last one I was associated with (from a distance) was a '48 Series "B" Rapide in complete/running/unrestored fair condition.  It went for ~58K at auction and that was about five years ago.  I've always wanted a Vincent so I could sell it and buy lots of Airheads...  or at least a pristine '69 R69S with an '84 R100RT in reserve.

Yep....  Thompson was also a serious BSA (Lightning Rocket, I believe) enthusiast during the time he was working on his Hell's Angels book.

Strangely enough, the last time I came across a '69 R69S that I coulda/shoulda snagged (in '83 before prices skyrocketed) it was a "celebrity" bike, at least according to the BMW dealer in Corpus Christi who had it for sale.  He claimed the bike had belonged to Tom Smothers.  It did have a CA license plate on it at that time.  I don't remember exactly what he was asking for the bike but I thought it was a trifle steep even though the bike was in immaculate condition with an unscratched set of hard bags.  At that time interest in BMW's was still fairly nascent in South Texas so I though I'd let the bike gather a little more dust at the dealership and hope for the price to soften a bit while I headed off to Louisiana for my regular four week stint on an offshore oilfield supply boat.  I was living in Port Aransas, TX at that time and riding a '76 R90/6 back and forth to work (one of the bigger mistakes I have made in this life was letting that bike go after only ~140K  😭).  Needless to say, when I got home with a pocketful of the finest the bike was gone and the dealer never would tell me if he got his asking price.... which I took to mean he probably didn't.

I made the mistake of starting to read the book a fear and loathing in las vegas on a plane & I was LOLing people thought I was a psycho. And yeah, I've sold so many bikes & cars I wish I still had - I want to drop to my knees hang my head & cry.